Pokémon GO It is one of the most outstanding games of recent years. Being able to capture these creatures in real time has allowed its users to remember their childhood as they had never imagined before. The Pokémon universe has changed a lot throughout its history, introducing new objects to evolve some species. One of the new elements that this game has adopted from other versions of the saga is mega energy, highly coveted to get us with the best Pokémon.

In 2013, the sixth generation of the Pokémon saga saw the light thanks to its versions X e Y. These brought with them many novelties that we had never seen before, among them the megaevolutions. These are very powerful evolutions that could be applied to some species during battles, using a mega stone. In the case of Pokémon GO, this did not arrive until August 2020, and it did not do it in the same way. In Niantic's game it is known as mega energy, and it is a specific element for each creature.

What is Mega Energy for in Pokémon GO

Mega energy is an element that allows us to evolve certain Pokémon to obtain really powerful creatures. It is cumulative and specific to each species, so it cannot be applied to others that are not of the same species. Through it we can get hold of the coveted megaevolutions, which is basically an extra evolutionary stage that some Pokémon can adopt. However, this new state is only available for a certain time, so the ideal is to use it in battles or raids to win.

When they reach this state, the creatures change their appearance and improve their statistics considerably. As we say, they do it for a specific period of time, during 8 hours exactly. At first it was only available during 4 hours, but the month after its launch, in October 2020, they decided to expand it to improve the experience and be able to enjoy these strong creatures more. These will be registered in a specific section of the Pokédex, called Mega Pokedex. In addition, we will also obtain two new medals, one that will measure us unique megaevolutions and another to measure the total of these.

You should know that you can only have one mega evolution active at the same time. This means that if you decide to do it with another creature, the first one that you have mega evolved will return to its normal state. They did this so that the fighting and the raids were not so uneven, since these Pokémon acquire much higher statistics than the rest. However, the Pokémon dark and clones they cannot mega evolve, although they can adopt their version shiny if preevolution is in that state.

To Mega Evolve one of your Pokémon, you will need 100 ó 200 mega energy points, depending on the creature. You must have a sufficient number of candies, just like any other evolution. Once you have done this, the cost of mega energy points will drop to 20 ó 40 in case you want to reactivate it on that Pokémon. Some species have more than one megaevolution available. For instance, Charizard It has two, but only one of the forms you choose will need less mega energy for the next time you want to do it. Also, if you want to reduce the cost in the other way, you will need to Mega Evolve it first using the total cost.

Using Mega Evolutions in combat has several advantages. First, they can give other Pokémon on your team special bonuses when they participate in raids. While on the battlefield, others will upgrade their attacks and receive an additional attack boost if the type of their attack matches the types of the Mega Evolved Pokémon. Of course, you should know that you can only have one in the team, although the ideal is to join several of the same type to take advantage of this advantage. You can fight them in Gyms, although you will not be able to leave them to defend. On the other hand, you can also fight the Team Go Rocket, although you will not be able to do it in the GO Fighting League.

Methods to get this item

There are several ways to get mega energy to get these powerful creatures. The first of them and the best known is participating in mega raids. These are special raids that have very strong species, for which we will have to defeat them with other trainers. How much of this item you get depends on how quickly you defeat the raid boss. After beating him, you will see a speed stat on the summary screen that will determine how much you have won, as well as a chance to grab the Pokémon and get more candy.

In May 2020 they added a new method that many players have greatly appreciated, since the first one usually becomes quite a complicated task. Now we can get it at walk with our partner. By assigning it, we can easily get mega energy. Of course, it must be a Pokémon that can megaevolve and that we have already done before. In this way, each time we complete 1 kilometer with our partner we will obtain 5 points of megaenergy.

The third method is by completing research tasks. In these missions we will obtain more mega energy, especially in investigations discounts, and we can complete them thanks to Professor Willow. In fact, we will also get special items in the game if we complete them correctly. On the other hand, events that organizes the game from time to time will also provide us with this element, although they tend to occur infrequently.

What megaevolutions can we find in Pokémon GO 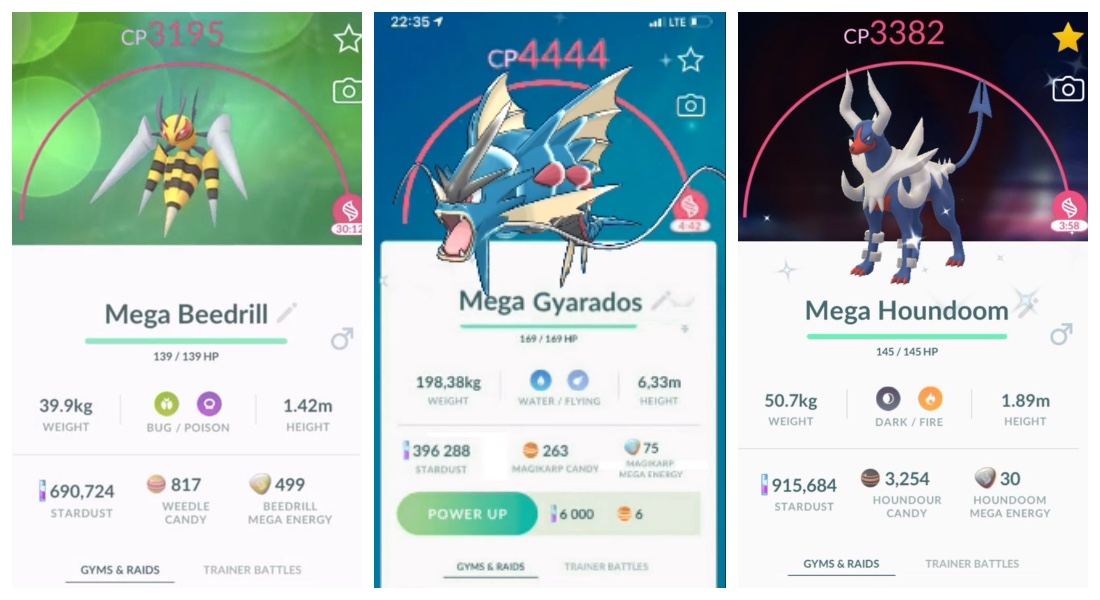 At the moment, the number of these special creatures is quite limited. However, it is expected that as updates are released, they will incorporate new megaevolutions to have a better chance of getting one of these powerful creatures. They are not all available yet, but this is the definitive list of Pokémon that will be released progressively: