One of the great advantages are its launchers and its great capabilities and customization possibilities. Beyond the layers of manufacturers, the launcher communities work fast and We already have available the new Pixel 2-style Action Launcher.

The new Action Launcher promotion focuses on the possibility of replicating the style of the Google Pixel 2 and Pixel 2 XL on your mobile phone. From the search bar on the dock to the new weather and calendar widget, the idea is clear: Oreo + Pixel.

To all this they add their own flavor. The search bar is fully customizable not only visually, but in the buttons it offers. We can add shortcuts to WhatsApp, Instagram, Facebook ... and also color the icons according to the rest of the bar.

Notification points, previews, Google Now integration as in Google launcher ... Adaptive themes and icons are also included. The former cause the backgrounds of folders and other elements to be modified as you change your wallpaper. The seconds require a separate icon pack and allows all apps to uniformly look different shapes in their icons. Thus, instead of finding the normal logo within a white circle, the icon will adapt correctly to fill the surface. 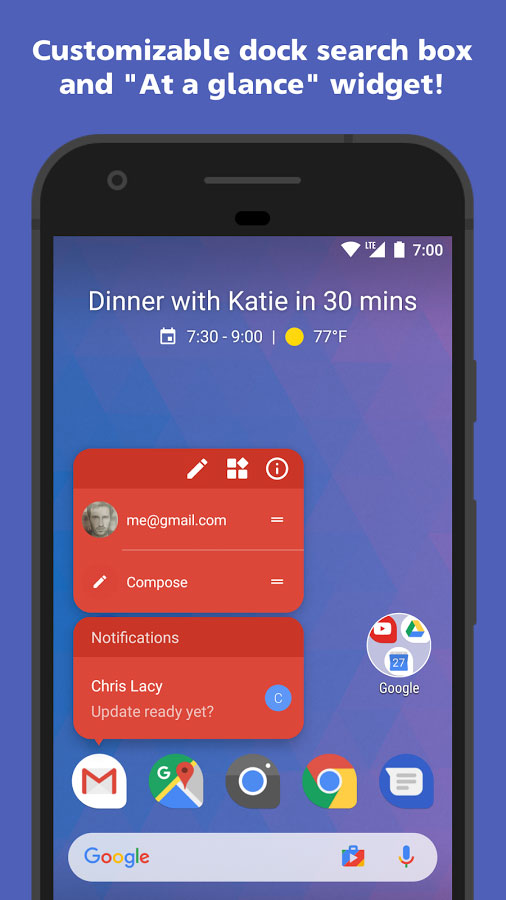 You can also use what they call Shutter Widgets. What this means is that you can launch a widget through the application icon on the desktop, without having to always have it present on a screen. Use it when you need it, hide it when you don't. There is also the possibility of grouping folders in an app. With one touch you will open the main application, and dragging upwards you will open the folder.

New features for a new look

All these possibilities respond to what we already mentioned at the beginning regarding the enormous customization possibilities that we have available on Android. What's more, from Action Launcher they have taken the opportunity to renew their corporate image. They renew their logo, their name and launch a YouTube channel.

If you are interested in trying the new version of Pixel 2 style Action Launcher, you can install it from the Play Store through the following button. If you use another launcher, it will allow you to import the settings to start with something known and build from there. Some features of Action Launcher are free and some are paid (from 5 to 10 euros).